Dr. Philip Chang is an experimental particle physicist who studies the fundamental forces of nature and its building blocks. He has been a member of the CMS Collaboration at the Large Hadron Collider (LHC) of the European Organization for Nuclear Research (CERN) in Geneva, Switzerland. In the past, Chang had also been a member of ATLAS Collaboration at the CERN LHC. 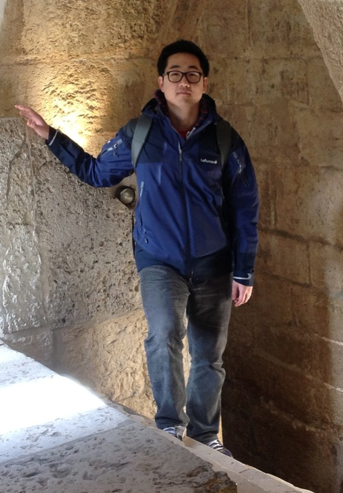 
Chang's primary focus is on the investigation of the electroweak and the Higgs sector of the Standard Model (SM) through studying production of multiple massive particles. He has been involved in several searches and measurements of multiboson (boson = W, Z, H) signatures at the LHC.

In CMS, Chang et al. have initiated the effort in search for the production of three massive gauge boson VVV (V = W, Z) processses and led a team of analyzers as the analysis contact person. The search resulted in the first observation of VVV process and first evidence for WWW and first evidence for WWZ processes. This observation establishes a groundwork for a new triboson physics program at the LHC and will produce many more measurements for years to come.

In the past in ATLAS, Chang has also contributed to the discovery of the Higgs boson by studying its WW decay mode. He also significantly contributed to establishing the first observation of H→WW* and first evidence for vector boson fusion (VBF) H→WW*, which provided the most stringent constraint on Higgs Yukawa coupling strength at the time. He also searched for an extended Higgs sector, which might elucidate the nature of dark matter by using the Higgs boson as a tool.

News coverage and press releases on Chang's work on H→WW:

On a more technical side, Chang has been developing a parallel track finding algorithm (IRIS-HEP project) to address the challenges of exponentially increasing computing resource usage at the High-Lumi LHC (HL-LHC). He also participated in hardware-based track finder development for the ATLAS trigger system called the Fast TracKer (FTK) in its firmware and optimizing the second stage track finding algorithm. In the past, he has also contributed to trigger system as well. He coordinated the effort of designing VBF triggers for the Run 2 data taking.


The rare production of three massive gauge bosons VVV (V=W, Z) at the CERN LHC is interesting as it involves cubic and quartic interactions of massive gauge bosons as well as Higgs boson to gauge boson couplings via VH→VVV process. These multiboson interactions arise from the non-abelian character of the SM and through spontaneous symmetry breaking of SU(2) × U(1). If new physics is present at the high energy scale, the measurements of the VVV production cross section might deviate from SM predictions.

Chang has worked on the analysis and led the analysis team as the analysis contact person to establish the first observation of the VVV production in proton-proton (pp) collisions with 5.7σ. The team covered a multitude of final states covering same-charge dilepton, three, four, five, and six leptons final state. The work also established the first evidences for WWW and WWZ production with 3.3σ and 3.4σ, respectively. This opens up a new physics program where cubic/quartic gauge boson interaction and the interaction between gauge boson and Higgs boson can be studied. 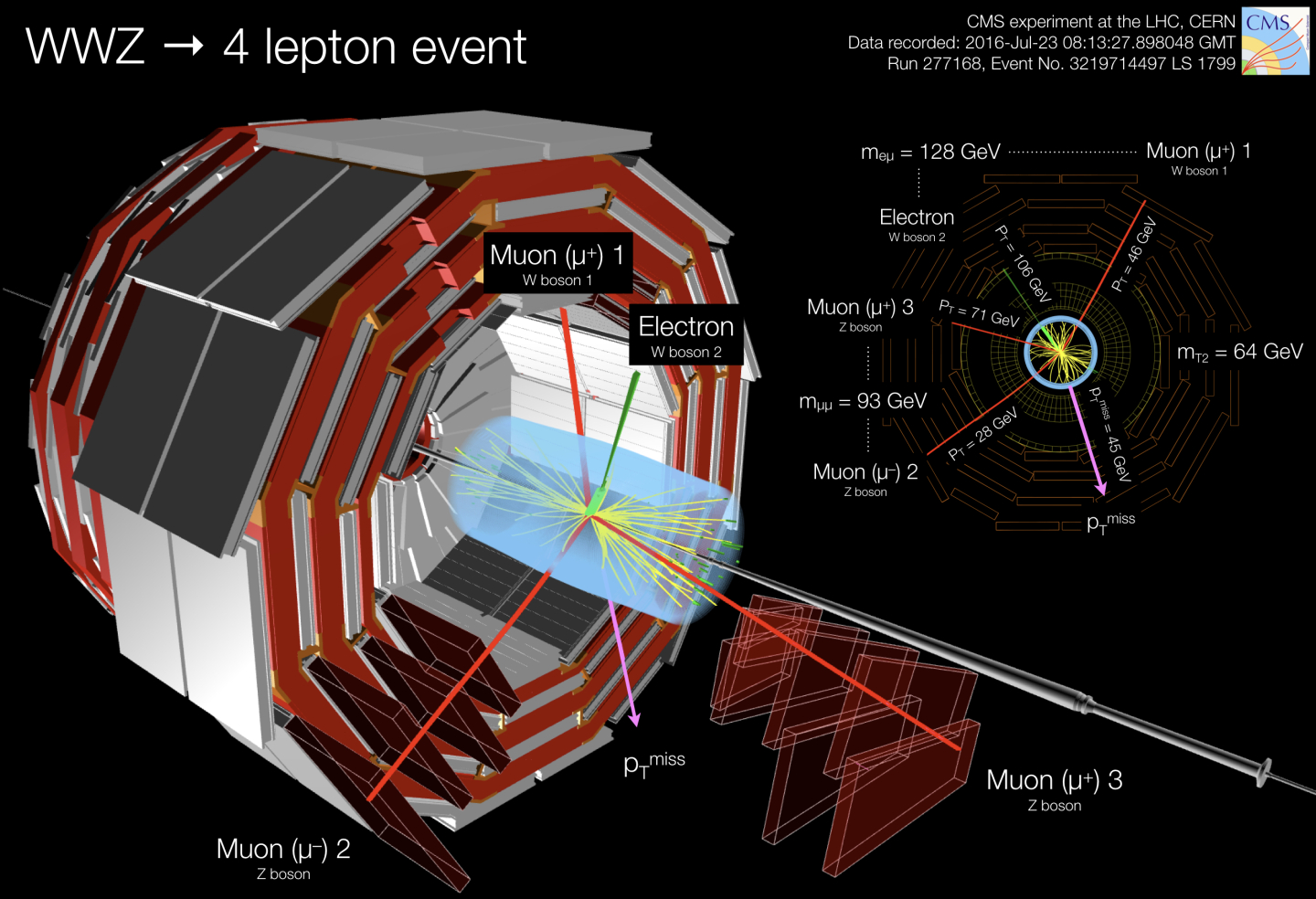 
One of the most important aspects of event reconstruction is particle tracks reconstruction. Tracking allows physicists to be able to distinguish one type of particle from another and to measure the particles' momentum with great precision. However, in HL-LHC the increased pileup leads to exponentially increased track reconstruction processing time making it computationally very challenging to carry out the analysis in a reasonable timescale. (See here) The main limitation is due to the current track reconstruction algorithm being inherently sequential making it difficult to leverage various hardware advancements in parallel architecture such as GPUs or FPGAs in the industry. Thus, Chang et al. have been working on implementing an inherently parallelizable algorithm to be used by CMS experiment in HL-LHC (See here for recent presentation). In particular, a segment linking algorithm, similar to the one illustrated here is being developed for CMS experiment for HL-LHC. 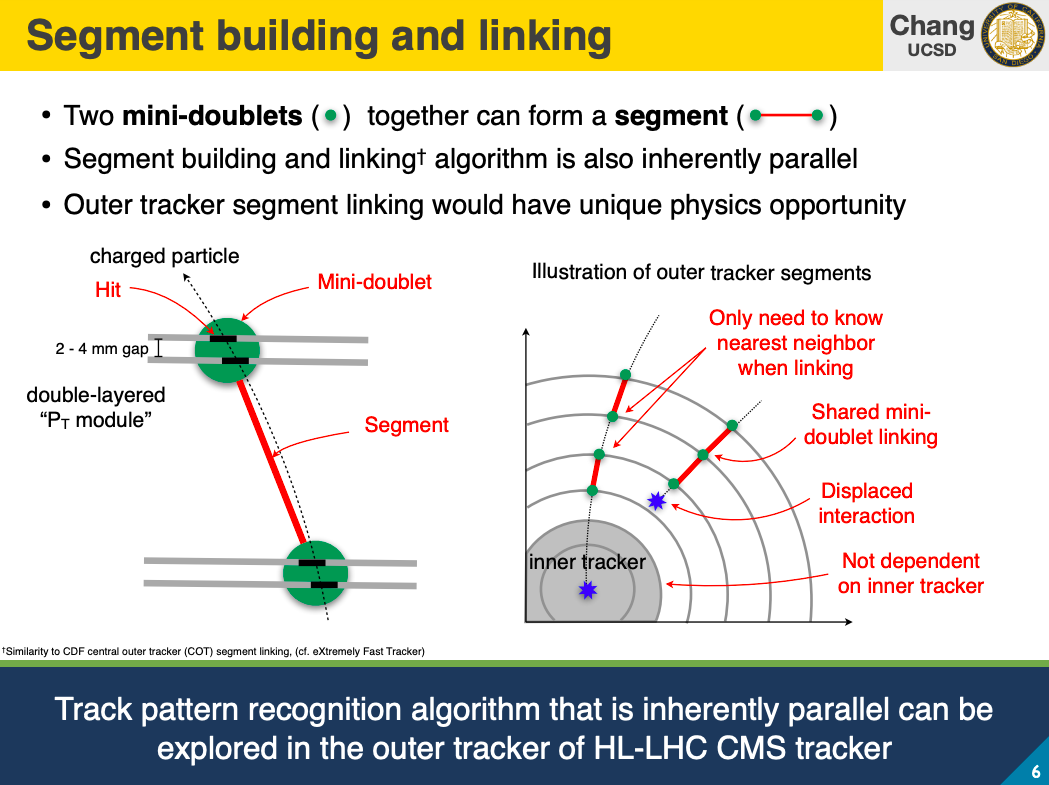 As a graduate student at the University of Illinois at Urbana-Champaign, Chang contributed primarily to establishing the first evidence for the vector boson fusion (VBF) produced Higgs boson in exclusive Higgs boson decay channel (H→WW*) with 3.2σ. This measurement provides one of the strongest on the fermionic-coupling of the Higgs boson. In combination with his work on VBF H→WW*, the first observation of H→WW* with 6.1σ that provides the most precise single-channel measurement of the Higgs boson signal strength was established. (See CERN courier article here) 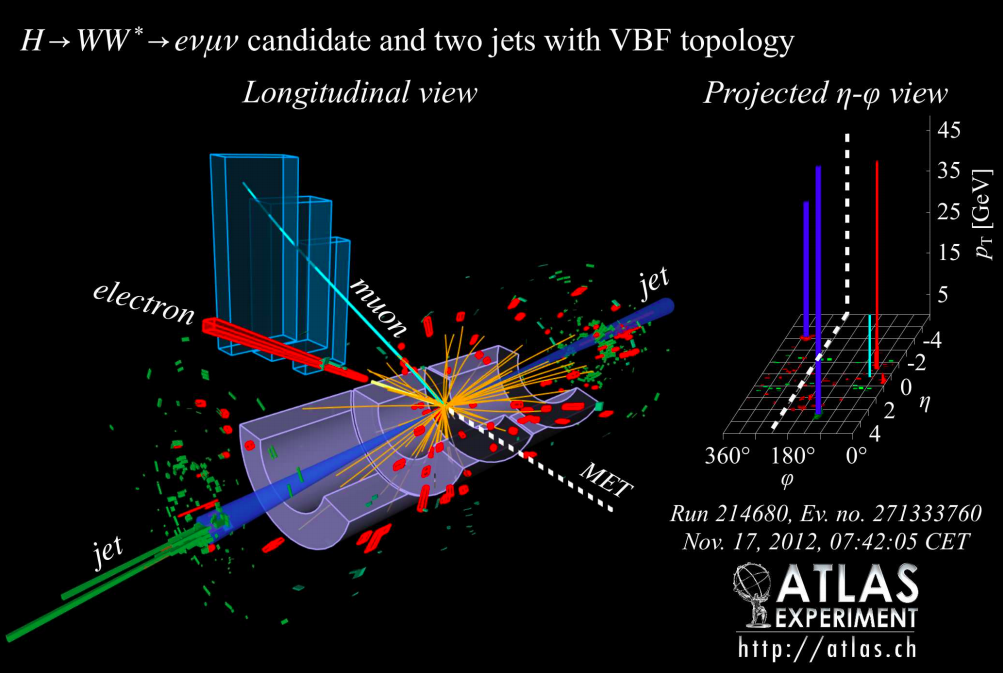 The Fast TracKer (FTK) is a hardware-based track finder for the ATLAS trigger system. Chang has participated in designing of the second stage board sub-system of FTK, and optimized second stage track finding algorithm and implemented firmware.

Chang has contributed in designing VBF triggers for the Run 2 data taking. He served as a Trigger co-Contact for the Higgs group and coordinated VBF trigger development activity.